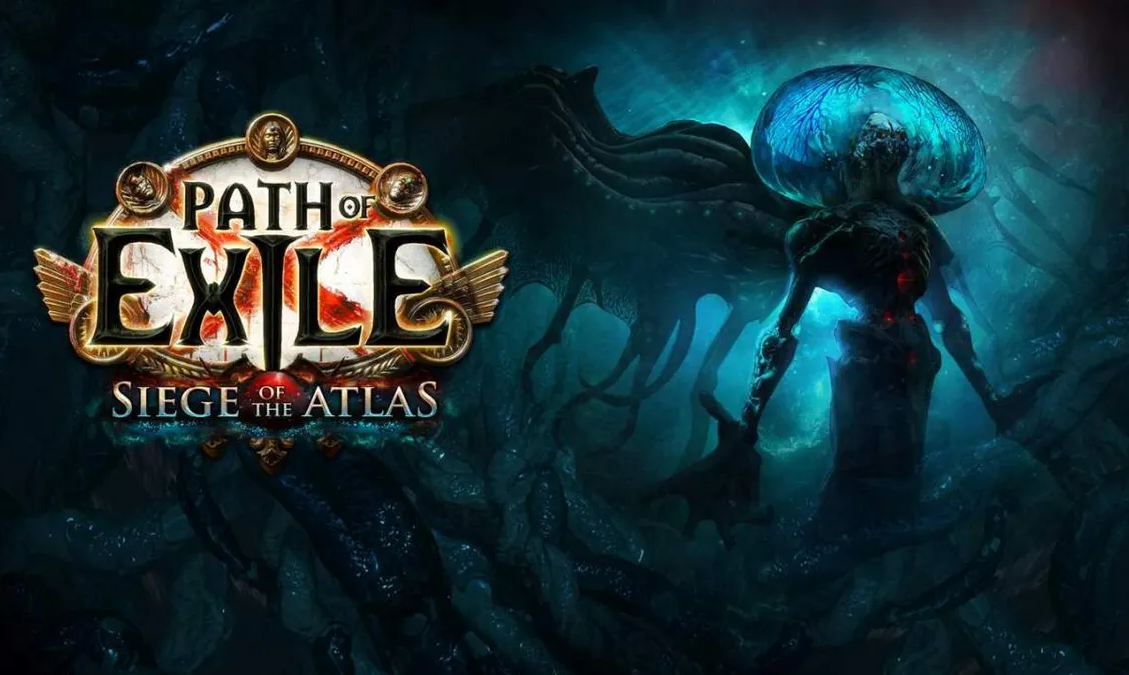 3.17 Siege of the Atlas Logo
GamingGuide

The time has arrived! We have a new league that completely revamps the end-game for Path of Exile, and I must admit, I’m VERY happy they focused on adjusting (mainly buffing) existing skills and refining the end-game process rather than introducing numerous new skills to an already overflowing pool of options.

Before we begin, for those who want to review them, the patch notes for 3.17 can be found here. If you want to see the changes to the skills, go to the “Hit-based Spellcasting” section and open the spoiler section under Specifics.

This new league (which is called Archnemesis, but the actual expansion is called Siege of The Atlas) will focus more on killing mini-bosses than clearing (similar to Metamorph), so taking down tougher targets is an important consideration when considering a build for the new league.

Something just for fun, I wanted to share the below 3.17 Build Selection Chart. Credit to Reddit User MrMeltJr.

This overview covers guides not only tested and created by myself, but also presented by the community. The good news is there wasn’t enough drastic skill changes to 3.17 to completely nerf or destroy existing performing builds. In fact, this is one of the first leagues in recent memory where most builds from the previous league are not only intact, but many are even enhanced.

Separate from character builds, the biggest overall change to 3.17 is the Atlas Passive Tree, which allows the player to build out a complex atlas skill tree at end-game to enhance maps in numerous ways, including increasing quantity and rarity of items, and augmenting monsters and bosses. There’s even nodes to guarantee a shrine, duplicate currency from strongboxes, or receive additional missions from Kirac. The very cool thing about this atlas is it allows players to focus their points on the type of content they prefer to run at end-game. If one wants to focus on Delirum or Legion, they can select the associated nodes. Ultimately, this is one of the greatest changes (and enhancements) for end-game we have seen in years, and has amazing potential. There are many videos available, but I like the one ZiggyD put together the most.

Nearly every skill in the game was buffed; some by quite a bit (take Arc, for example). The problem is that players didn’t avoid self-casting skills because they didn’t do enough damage; they avoided them because standing skill and taking time to cast often resulted in the cast time causing a split second response death that could have been avoided if the player wasn’t locked in casting. While we can’t know the overall impact of buffing nearly all of the self-casting skills until a few weeks after the league is live, it’s hard to say at this time if the buffs will make the skills any more viable for true end-game and bossing. Regardless, I will be including two references to self-casting builds in this compendium for Arc (thanks to Enki and Subtractem).

Unlike previous recent leagues, most builds that performed well in 3.16 will continue to perform well (and in some cases, even better) in 3.17.

Here are my recommend top starter builds for the upcoming Path of Exile 3.16 Scourge League.

Explosive Arrow Hierophant (and others)

I started the league as a Explosive Arrow Hierophant and was not disappointed. While I wasn’t able to play as much over the weekend as I would have liked, I was steamrolling through yellow maps (almost to Reds) by Sunday, had a 6L and even found a Dead Reckoning jewel; all in SSF. Note I’ve updated the PoB link below with the latest build. I switched over to EA right after I got the 4L setup from the Library. EA Hierophant is probably one of the best league starts I’ve ever had, and the character is easily handling all of the bosses. I definitely recommend this build for anyone who is coming into the league a bit late or is looking for another build to try!

I recommend Hierophant over Champion or Elementalist for Explosive Arrow. It’s much easier to level, only requires 3 labs to reach its full potential, and has the best balance of DPS and tanking. The HCSSF leaderboards also show Hierophant to be the optimal choice, with Hierophant being the first L100 HCSSF EA in 3.15, 3.16 and 3.17.

Here is the link to my EA Hierophant PoB for 3.17, which has leveling trees and notes to easily help the player through the leveling process: https://pastebin.com/fDZZXD1b

For those who want a video, here’s one from Zizaran!

Tatinatiel is considered one of the best Totem players in all of Path of Exile. I can vouch for his skill and excellent builds. Note he’s put together a compendium of Totem builds for 3.17 including Flameblast, Storm Burst and Ball Lightning. I recommend keeping an eye on the below document as he’s sure to enhance it when the league start begins. Next to EA, it’s my opinion Ball Lightning Totems are one of the best HCSSF options for 3.17. Tati has put together a complete PoB with leveling trees and notes at the link below.

This is one of the best builds in the game; it’s tanky, freezes everything, fun, and can do all content in HCSSF. Oh, and it was buffed in 3.17! I’ve played this build numerous times and it’s one of my favorites; as such, it’s my 2nd choice as a League Starter for 3.17. Here’s a copy of my personal PoB for 3.17 that contains both trees and notes detailing how to efficiently level this build: https://pastebin.com/X7dHbCiR

Below is a Vortex Occultist Build Guide video made by Jorgen.

Minion builds always shine with each league, and Skeleton Mages will ROCK in 3.17. However for those playing SSF, it can take a long time to find the necessary Dead Reckoning Jewel. The good news is Physical Skeletons will easily get you into Red maps, and once you get a Vaal Skeletons gem, you will melt any and all bosses.

Von Vikton created a complete guide that includes both the Physical version prior to transitioning to the Skeleton Mage version.

Once again, traps are going to rock this league, and it’s estimated the most powerful will be Seismic and Exsanguinate traps. Here’s a complete guide from Big Ducks.

For those who want a much more detailed guide, I recommend this one by OMFGaTaco: https://www.pathofexile.com/forum/view-thread/3148278

This is one of the most relaxing all-content builds out there, plus it’s just enjoyable to play, and is capable of all content. Zizaran published a 3.17 Righteous Fire Inquisitor guide based on Pohx’s build.

Many players are talking about how great a Bane Occultist is as a league starter, and it performed very well for 3.16; and guess what? It got buffed in 3.17! Subtractem makes the best guide for this build, and I highly recommend it!

As mentioned, numerous skills received substantial buffs to their damage in 3.17. For those who want to play self-cast builds this league, I recommend Arc. It’s one of the most fun skills in the game, and received a 50% damage buff. It just so happens the most popular build guide in the history of Path of Exile is Enki’s Arc Witch Elementalist, which has been updated for 3.17. It’s great for both new and experienced players. Here’s the link: https://www.pathofexile.com/forum/view-thread/1147951/page/1

I also want to mention that Ball Lightning was also buffed nearly 50% as well, and even though I don’t have a recent PoB, I’m confident self-cast BL builds will be quite powerful this league for those who want to dabble with it.

ED/C didn’t really receive any type of buff, but it’s always been a great league starter for all gameplay types, including HCSSF. It can do all content; plus it’s fun to 1-shot the entire screen. While this is Zizaran’s 3.16 Essence Drain Trickster build guide, it applies to 3.17 as well!

Toxic Rain has been one of the best generic starters in the game for years, and there are numerous variations players can choose.

TR Champion was the #1 build in 3.16. The damage reached 4-8M DPS, it was tanky as all getgo, could do all content, and dominated HC/SSF. While Toxic Rain did receive a slight 16% or so nerf in 3.17, it will still perform exceptionally well for those who love the style of the skill, with Champion still being the best choice for survival and all content.

Zizaran made a video based on Lightee’s build for 3.16, which will work just fine in 3.17.

No compendium would be complete without a “spin to win” build! Here’s a complete guide for a Cyclone Slayer by Navandis.

Storm Brands are a ton of fun and great for league starting, and will perform very well in 3.17. This complete Storm Brand Occultist guide by Velnya is a great league starter: https://www.pathofexile.com/forum/view-thread/3079363

For those who are not playing SSF, Carrion Golem builds are always solid, and they will continue to shine. Below is Von Vikton’s Carrion Golem League Starter Build Guide.

Summon Raging Spirits has been one of my favorite “fun factor” builds in Poe, and it’s a lot of fun to revisit every few leagues; it’s also one of the easiest league starters out there. It’s just not as “robust” as other builds for HCSSF and end-game content without serious investment, but it can easily take players to red maps and is great for farming gear. Von Vikton just released his Popcorn SRS guide today.

With all of the enhancements to existing skills, there’s no question there are TONS of other potentially great league starter builds, but I wanted to present a list based on personal experience, what we’re familiar with, and the application of changes in 3.17.

I hope this list helps the PoE community; here’s to the continued success of Path of Exile and the fantastic job Grinding Gear Games has done!